Songwriters are the foundation of the music industry, and yet they have to fight the hardest for their royalties. Not only do they make three times less than recording artists on streaming royalties, they also lack extra income sources such as touring, and it’s more difficult to track uses of their copyrights online, limiting monetization.

At Pex, our vision is attribution for all, and we support all rightsholders from major labels to independent songwriters and creators. Our technology has been used by music companies for years to find and monetize their music across various content-sharing platforms, but the key ingredient for songwriters was missing. Now, we’re one step closer to attribution for all with our revolutionary melody matching technology which supports cover song identification and allows more compositions to be identified and attributed back to songwriters.

To understand the true impact of this technology, you first need to understand why songwriters have it harder than recording artists when it comes to tracking digital royalties.

Why is tracking digital royalties more difficult for songwriters?

Songwriters and their publishers own the rights to the underlying compositions of songs (the music and lyrics), while recording artists and their labels own the rights to the actual recording of that song (the end result you hear on streaming services or the radio). If a song is recorded or performed multiple times by different artists, the songwriter is owed royalties on all of those uses. This includes cover versions of songs on social media, live performances, and the videos of live performances that are uploaded or streamed online. 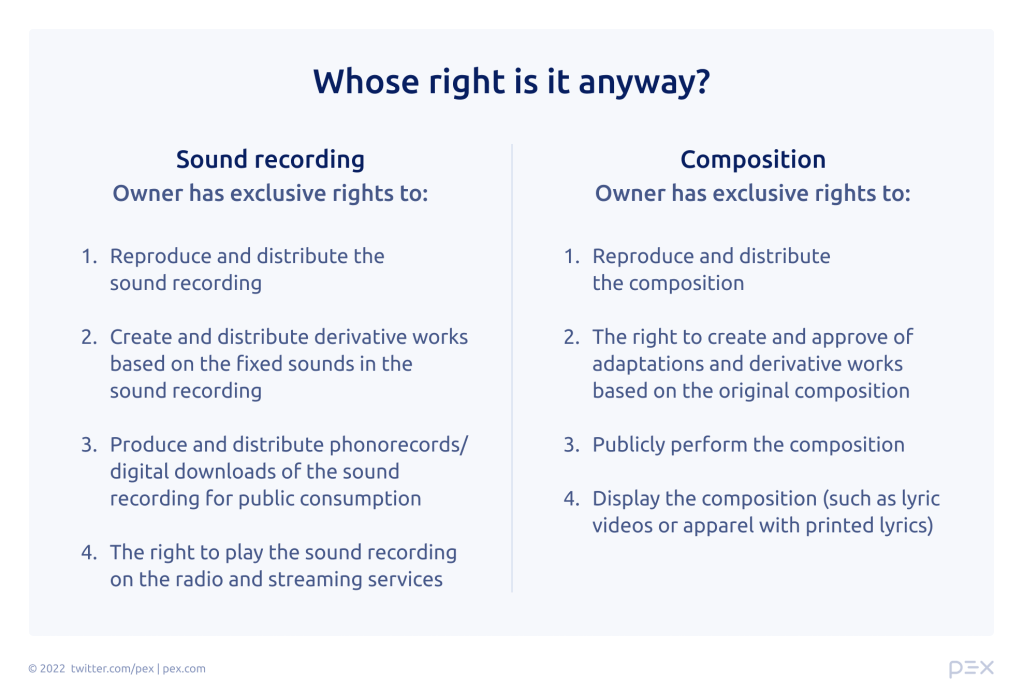 Because you can’t hear or track a composition without it first being played, compositions have historically only been identified when attached to a recording. For example: technology searches for the recording, and then maps it back to the songwriters. However, when a cover song is uploaded online, it won’t match against its original recording because it’s a different artist, likely with different instruments and other alterations. This makes it incredibly challenging to identify and pay songwriters.

To make matters worse, when recordings are identified, songwriters often don’t receive their royalties because of failed attribution. There are usually numerous songwriters and publishers who need to be attributed for every single recording, and they aren’t always known. When not every rightsholder is identified, their unclaimed royalties are held in a “black box.” But the unclaimed royalties are frequently paid out to other rightsholders so the revenue isn’t held in limbo. If the songwriters haven’t been attributed before the royalties are paid out, they lose them. 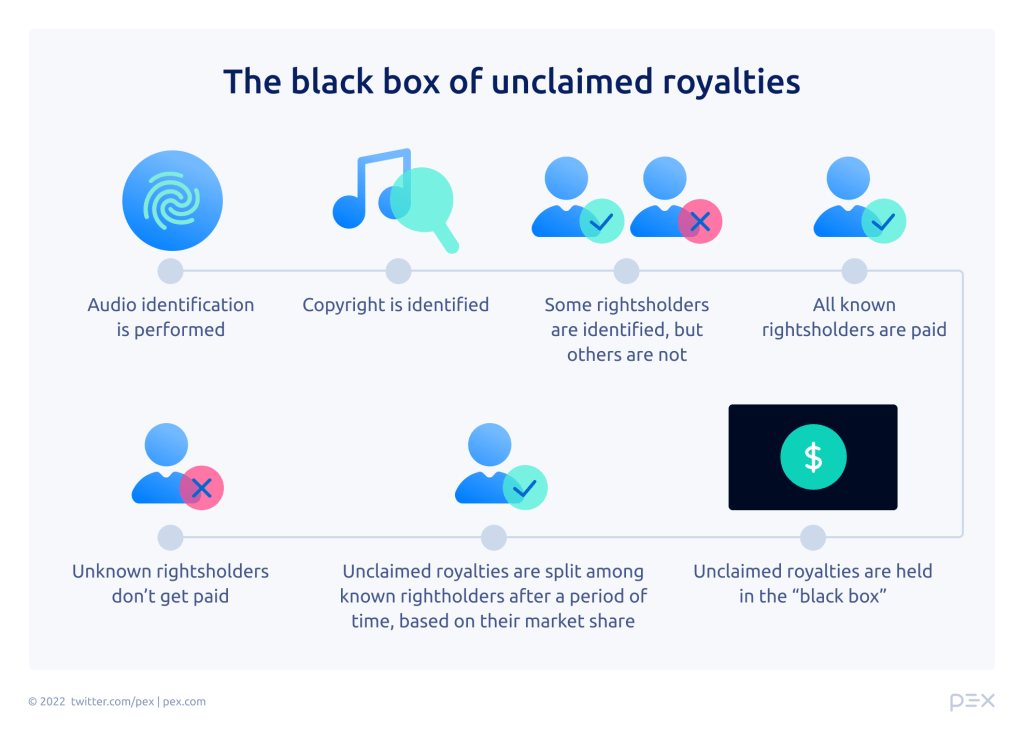 Because of these challenges, being able to identify the most uses of copyright and receive proper attribution is paramount to songwriters’ and publishers’ livelihoods.

Technology is also improving and making it possible for compositions to be identified without an identical recording match. At Pex, our audio identification is unrivaled in scale, speed, and accuracy – but as mentioned, audio identification isn’t enough to help songwriters. With our melody matching technology, we can find the elusive cover songs and live performances that songwriters have been missing, so they can finally receive attribution.

Audio identification matches different or altered versions of the same underlying sound recording by leveraging digital fingerprints, which are compact representations of audio files. For example, if you fingerprint the recording of Taylor Swift’s “All Too Well” and then compare it against a database of fingerprinted content (like the one Pex has built with over 22 billion fingerprints), then you can find other instances of the song. This would include any versions of the recording that have been shortened, sped up, had the pitch altered, or were edited in some other way. However, if any of the content contains a different recording of “All Too Well” –  such as a cover version – then it will not match, because it is not the same sound recording. 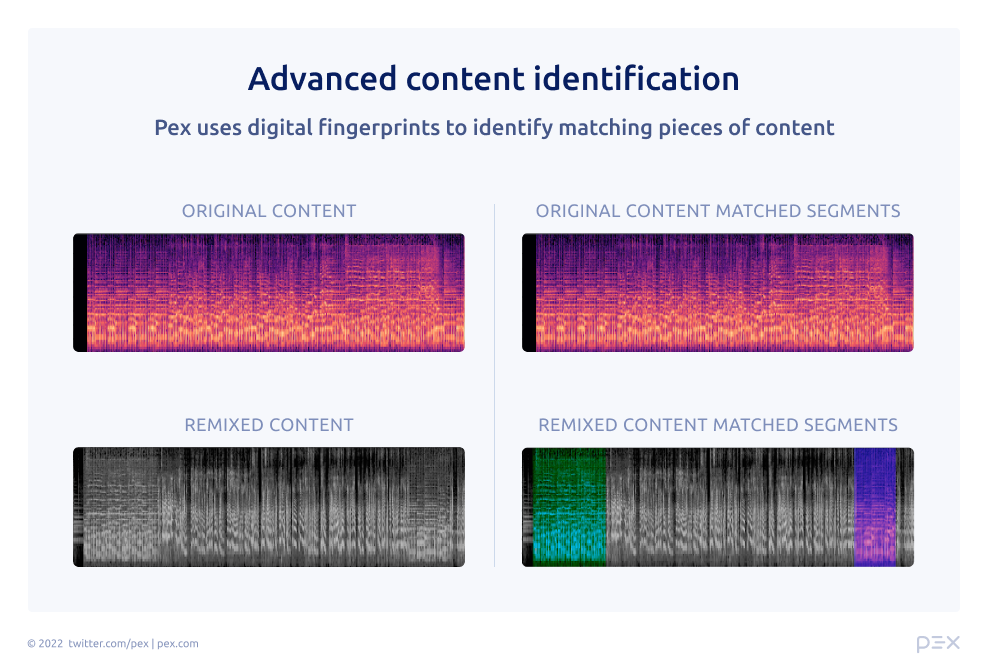 Identification via melody takes a different approach. Instead of looking for identical matches, fingerprints are created of a song’s melody – the repeating and often addicting part of the song. Using the melody fingerprint, we can leverage every use of the composition to find more matches. Think of it like the six degrees of separation theory: each match connects to another match, which enables new matches. Every new composition match represents potential revenue for songwriters and publishers. When possible, these matches can be monetized on platforms, can aid licensing negotiations, and can increase a writer’s market share on a platform, earning them more of those black box royalties.

While there are still other challenges to be solved in order to achieve attribution for all, melody matching shows how advanced technology will bring more attribution and payment to songwriters and publishers.

Contact us to get a demo of melody matching and learn how Pex can help you find uses of your music. 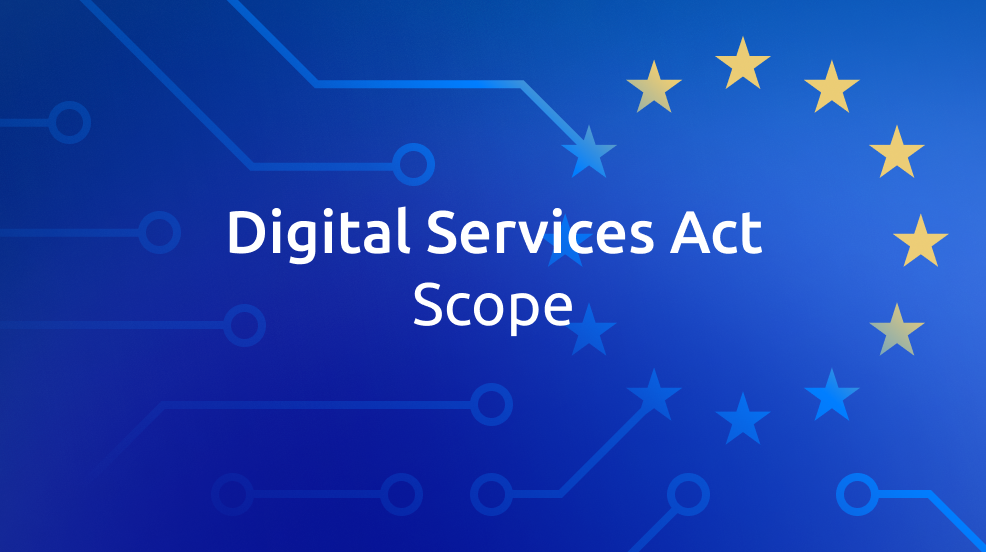